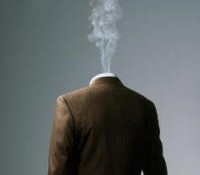 If stress is constipating your brain, it’s time to make way for positive, creative thoughts.
By Steve Baker

“Every now and then go away, have a little relaxation, for when you come back to your work your judgment will be surer. Go some distance away because then the work appears smaller and more of it can be taken in at a glance and proportion is more readily seen.”
– Leonardo DaVinci

A few months ago I was attending a networking event and a client introduced me to Bill. When Bill discovered that I was a serial entrepreneur and a business advisor, he opened up and explained that his business problems were driving him absolutely nuts. He had a small company that he had sunk all of his time and money into and things were going terrible. He had lost a big account and was grappling with how to not lay off some of his staff. Bill felt like his head was going to explode.

I could see the immense stress and pain in Bill’s face. He hadn’t had a good night’s sleep in weeks and was spending every waking hour staring at the same problems with no apparent solutions. He confided that he was at a loss for ideas and asked if I could offer any suggestions to help.

Bill was buried under a pile of stress and his mind could no longer function in a creative way because it was totally constipated with useless negative crap. By allowing himself to be constantly surrounded by his problems his mind could not get a new clear original thought flowing.

Here’s my advice to Bill and to all of you facing similar circumstances: Give your mind an enema!

I asked Bill what his favorite thing was to do in his free time. He replied that he loved skiing, but even though we’re in Denver, he hasn’t skied in two years.

I told Bill to go home and pack his ski gear. Send an e-mail to the office saying that he will not be in the next day and cannot be reached. Get up early and head for Vail. Leave his cell phone in the car and spend the day skiing alone. Think only of each run and how he can go faster and better.

I explained to Bill that with every ski run he would find his mind freeing itself and while riding the lift, new fresh ideas would start flowing into his mind.

Bill responded that he loved the idea but didn’t see how he could do it. I replied that though I could not guarantee him 100 percent success if he went skiing, I could guarantee 100 percent failure if he thought about it tonight and didn’t go tomorrow.

I saw Bill about a month later at another event and this time he had a bounce to his step and a smile on his face. He did indeed go skiing and during the last run he remembered an old business contact with money and strong connections. They got together and his business was getting back on track.

My own mind enema is golf. Being an avid poor golfer, a round of golf clears my mind. So is golf or skiing the perfect answer to business problems? No, they’re just two of many ways of getting away and flushing out the negative thoughts that are constipating your mind, thus making room for fresh, positive and creative thoughts that will help you succeed.

“What happens is not as important as how you react to what happens.”
– Thaddeus Golas