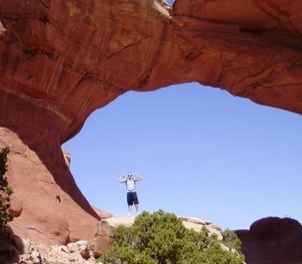 I have always been athletic since I was little, I loved playing sports and wanted to be a ninja. As I got older I practiced martial arts and got into lifting weights for the fun of it. I just loved Kung Fu movies and I lifted weights so I could get more girls. As I approached my mid-twenties though, most of my training had fallen to the wayside. Instead I had to focus on work and paying bills and life became more of a grind. I didn’t realize that my bad weightlifting habits and more sedentary lifestyle had made my body weaker. I thought that I was invincible like when I was younger and I could still run up a wall and do a backflip at a moment’s notice. I was wrong.

I was twenty four and now and living in Colorado, my girlfriend and I heard about a cool gym bigger than a basketball court covered in trampolines. Even the walls were trampolines! I was very excited to show off my moves on the tramp. I had one growing up and was pretty skilled in the art of flipping. About half way through our excursion I felt a small painful “pop” in my lower back. I didn’t think much of it and kept jumping even though it hurt. I still wanted to practice a new move I was working on. After our hour on the trampolines was up the pain got worse.  By that evening I was hunched over in pain and could barely walk. I still thought I’d be fine in a day or two.

Weeks turned into a few months and I was still in a lot of pain. I still hadn’t seen a doctor because I had no insurance at the time and I didn’t make too much money at my job as a waiter.  I struggled with having to work in pain everyday and I couldn’t continue the activities I used to enjoy. I just kept plugging along day to day, not realizing that I was getting depressed. I was so angry that my back still wasn’t better.

After at least a year of living like this I was finally able to get on my girlfriends insurance. I was convinced I needed surgery and that this hell would finally be over. I was wrong. The doctor took some x-rays and he just thought it was a muscular issue and that I’d be fine after a little physical therapy. I didn’t think so, but I went along with it. It didn’t help whatsoever. I was angry the doctor didn’t take me seriously. I was angry I couldn’t get on with my life.

I decided to find another doctor. This time I got an MRI, it showed some minor disc degeneration and slight retrolisthesis, a displacement of one of your vertebrae. This doctor didn’t think it was bad enough to warrant surgery and he too prescribed physical therapy . I also tried other alternative options at this point, such as massage, acupuncture, dry needling, electrical stimulation, chiropractors, even anti-depressants that supposedly help with pain. I fell into worse depression. I drank and smoked marijuana everyday to dull the pain in my mind and body. My life became repetitive and I couldn’t break the cycle. Working at a job I didn’t enjoy and dealing with pain, I didn’t like who I was turning into and I couldn’t stop it. I would make some progress with my pain occasionally, but inevitably it would always come back like before. Was I going crazy?

Years went by and by the time I hit thirty I had had enough. I was now married and we just had a baby. I knew I had to change something. I had to do it for my wife and son. I decided that I couldn’t rely on doctors, I had to do this on my own. I thought of my Kung Fu heroes and people like Tibetan monks, who can do amazing things with their minds, and people who had it way worse than me. I was going to go back to physical therapy, but I would approach it differently this time. I would put my entire soul into it. I studied the human body and became more in tune with my muscles. Before I had just done the movements, but now I worked on my mind muscle connection. I was hyper-aware of my posture at all times. I studied nutrition and I quit the drinking and the pot smoking. It was a hard road, but I started to see results. These results gave me even more drive and determination. I was finally starting to have less pain and I was starting to be happy again! I kept at it full speed and made huge strides.

Which brings me to today. I still do have back pain, but it is much more manageable and infrequent. I have more control over my body. I continue to learn more about exercise and nutrition every day. I still have setbacks as well. I just recently pulled a muscle in my upper back doing one of my workouts, but I have learned how to cope with such setbacks and learn from these mistakes. The important thing is positive thinking. It really does play a profound role in your health I believe. I thought for all those years that there was something that the doctors needed to fix, when in actuality I had the power in my mind the entire time to fix my life

I now am studying to become a personal trainer, because I think that if I could help even one person who might have some problems like me, I could truly feel fulfilled. I want to be able share some of the wisdom that I developed over so many years of hardship, so that other people don’t have to go through what I did for so long. I absolutely believe that through the right mindset, proper exercise and good nutrition that anyone has the power to make their lives better. You can do it.

Steve Berube spent many years in pain and depressed before taking control of his life with diet and exercise. He is now studying to become a personal trainer and hopes to be able to share some of the wisdom that he has developed over many years of hardship, so that other people don’t have to go through what he has. He absolutely believes that through the right mindset, proper exercise and good nutrition that anyone has the power to make their lives better. So can you.