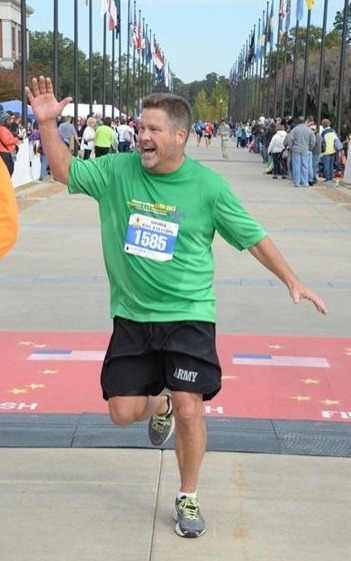 I’ve been running my whole life from grade school to the track team in high school and now as an adult. It has been the best help that got me through some of the most difficult times in my life. But when starting out it wasn’t always running for emotional balance.

After high school I joined the army reserves and was committed to maintaining a level of fitness as a soldier where I had to pass the army’s semiannual physical fitness test. I always tried to maintain some level of physical fitness but I never thought of running as a emotional pick-me-up. I never knew about the “runner’s high”. Not until I faced one of the most difficult, trying times of my life. That is when I discovered the really powerful, and positive affect that running can have.

The day that totally changed my running life was the day my wife informed me she wanted a divorce. I will never forget the feeling of utter shock and helplessness I had as she laid everything out. That day she handed me a set of papers that her and her lawyer had drawn up detailing what she was asking for, we had just moved to a different state where I was starting a new job. We had even bought a new house in a great neighborhood with great schools. After 15 years of marriage and four beautiful young girls I thought we had finally made it. We had worked, scrapped and gone through some very difficult moments to get to where we were. Everything I thought, at least in my mind, was perfect. So the surprise and devastation I felt when I received the bad news was paralyzing. Not only did she want a divorce, she planned to take the kids back to her home town, force the sale of our house and laid out the amount of money she was asking for in both child support and alimony. My range of emotions ran from utter shock to complete emptiness, from rage to sadness, I was all over the map thinking all kinds of truly crazy things.

That night I walked out of the house trying to get a grasp on the situation as all my emotions were still spinning in my head. I had no idea where I was going; I just needed to get out. My mind was running one thousand miles an hour with crazy thoughts and emotions, paralyzing my ability to think straight. As I began to walk, I remember I just wanted that crushing feeling of defeat to end. I needed to do something, anything to clear my head and start thinking clearly. As I began to walk, the sun was setting, I could not shake the feelings and emotions I was having. The thoughts in my head had total control. Finally, at some point during my walk, maybe a mile or so down the road, I started a very slow jog. As I began to jog, I tried to focus on my situation. I thought to myself, “What are my options? What can I do? I don’t want lose my kids? I cannot lose all the things I worked for. Why is she doing this?” As I concentrated on those and other questions I didn’t notice that my jog was slowly becoming more a run. I was angry and sad at the same time. My heart and mind were still racing. At some point I noticed my breathing, it was fairly hard and running relatively fast to the point where I could feel the slightest fatigue in my leg muscles. I was running on the asphalt path that ran along one of the main roads in our suburb and was more than several miles from the house before I even noticed that it was now dark, the sun had set. I finally turned around, going a little slower. The pent up energy I was holding onto was fueling my run. I was not thinking or feeling any physical exertion as I was running, I only had thoughts of my situation. I was totally consumed with my thoughts. I was preoccupied, thinking only of my options. As I ran a little slower I began to think clearer. I know my predicament was not going to change, but the way I thought about it did. As I ran back I was calmer; leaving my emotions out of my thought process I was able to think in a much more constructive way. I’m not sure how far or how long I ran that evening, but when I did finally get back home, I had the resolve I needed to fight for what I believed in.

We had a very tough three years and that left me emotional drained. There were a lot of battles, both won and lost. Thou I didn’t tally up the total miles I ran, I know I ran a bunch. I went through more than several pair of running shoes. I did end up getting what I wanted most, plenty of time with my girls. In the end, one of the biggest lesson I received through that experience, was that running can be a very positive influence on your psyche. I noticed that when I needed to clear my head I run; expelling unconstructive negative energy. The more powerful the negative energy the faster and longer I ran. The angrier I got, the more emotional pain I felt, the deeper I focused, the faster I run. Instead of my body becoming physically exhausted my mind is depleted of useless thoughts. I exhaust all those toxic harmful vibes. Running has become a way of coping with stress. Whenever I’m dealing with a tough situation I now run through it. Running cleanses the toxins in my head, feel much better about any situation I face after a good run. Things always seemed to be clearer and I know somehow I’ll be OK.

Although I continued to run for the physiological and physical benefits I have also expanded my running interest to include races of all sorts; from 5Ks to Marathons. I have invited friends and family to run both training runs and races. I now even set goals when I run races. I’ve run almost 15 marathons, countless 5Ks and 10Ks, and am in pursuit to run at least one marathon in every state. I have a ways to go! Even my daughters have started running. This past summer all four of my daughters ran the Bellin 10K in Green Bay Wisconsin with me. Next fall I hope to run the Twin Cities marathon with my second oldest daughter. In the past I used to run every Sunday with a very close friend and training partner. We made a deal that he would run a marathon if I went to Sturgis. During our runs we would discuss, dissect, and examine every and any topic that came up. Our longer runs were from 15 to 22 miles and those miles went by too fast. We eventually did our first marathon together in Tampa and are now making plans for another trip to Sturgis. Unfortunately he no longer lives nearby so I am now working to find a new Sunday morning training partner. We do still keep in touch and I’ll have him doing a marathon with me again when he returns to the states.

John Luecke is an avid runner that enjoys the physiological and physical benefits of running in (and sometime winning) races; 15 marathons, countless 5Ks and 10Ks, and is in pursuit to run at least one marathon in every state. He loves to spend time with his four daughters that joined him in the Bellin 10K in Green Bay Wisconsin and looks forward to running many more with them.
Contact: Facebook